It’s official. I’m a marketing geek. While scrolling through my daily digest business news and current events in my Blogline feed gatherer, an article caught my eye and rendered me – well – excited. Said article, found in the Wall Street Journal, announces the launch of a massive effort through a partnership of the world’s largest publication groups (including giants Hearst and Time Warner’s Time Inc.) to convince people that print is NOT dead, and that mass advertising in highly read print magazines is still an effective way to reach consumers.

Why does this excite a marketing geek? I’ve spent plenty of time on both ends of the “Does print advertising work anymore?” argument.  We marketers know that when client dollars are tight, print campaigns become difficult to justify based on the high cost.

This campaign, dubbed, “Magazines: the Power of Print,” will either support or defend the argument by pouring an estimated $90 million into a seven-ad campaign across some of America’s best read magazines to entice advertisers to spend on print advertising. 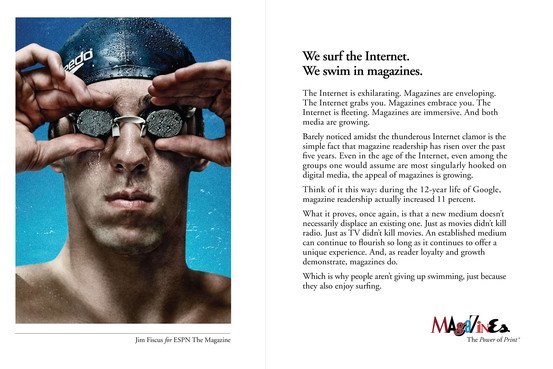 The initial ad in the campaign features Michael Phelps

This little experiment will prove, once and for all, if print ads actually work. Publishers are practicing what they preach to their own customers – and it is risky. If baseline metrics of ad dollars spent in these print magazines DOESN’T grow by the time the campaign finishes, advertising representatives for these magazines sure will have a tough time convincing their clients to spend dollars in the same way.

Fellow marketing geeks, let’s hear your predictions! Is the print ad dead, or do you think this campaign will work?