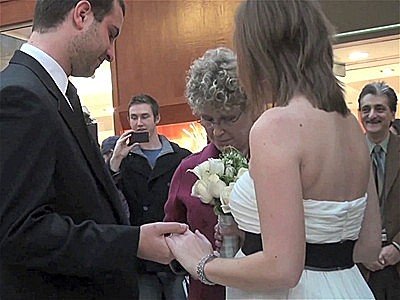 It’s fairly inevitable that in every MarketWave brainstorm session, someone will shout out, “We need a flash mob for this promotion/event/campaign!” It seems the popularity of flash mobs has touched each and every one of us at our agency with the sheer genius of the viral marketing possibilities.

This week, it hit me why flash mob is effective as a marketing tactic.

The most recent viral flash mob video, the flash mob wedding, made me realize that despite all of the ugliness we see in the news some days, people at their core are creative, witty and good, and can come together for a purpose.

The sight and sound of a huge group of strangers who come together, often via song and dance, wows those lucky enough to witness it, but also inspires millions to pass the video along so others can share a joyful, real moment.

It’s the same reason why the most popular news stories are those that have access a human connection – the stories about the dog who rescued his family from a fire, or the Chilean miners being lifted to safety. Negative stories may make headlines, but it is the heartwarming, positive features that get passed around and remembered.

It makes me happy to watch a flash mob video, and I can’t wait until the day when I finally get to use it for a client. Here’s a list of some of the best examples I’ve seen over the years, and feel free to add ones you like, too!