Do you have any drama in your workplace? Have you ever heard someone talk behind someone else’s back instead of confronting an issue, had a coworker express only the negatives about a situation, pulling the team down with them as they talk or seen someone avoid conflict with another person but manipulate with passive-aggressive behaviors?

When one of the speakers at the recent national Conscious Capitalism 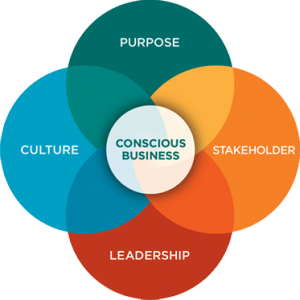 conference I attended, started his talk by asking if any of us knew what drama looked like in the workplace, there were more than a few chuckles from the audience. Let’s just say he could skip the part about defining what drama is. We all seemed to know it. And we were eager to learn some ways to avoid it.

Mike Maddock of innovation consulting firm, Maddock Douglas, Inc. was the speaker who showed up with the key message that it’s hard to innovate in your company if your smart employees are getting stuck in a “drama triangle” that isn’t allowing them to move forward with a level of trust in each other. He shared some helpful techniques for how to shift out of this triangle into healthier roles that produce powerful results.

Mike’s handout titled, “Escaping the Drama Triangle” described the three points of that triangle as Victim, Rescuer and Persecutor, and he explained that often employees will experience frustration with a person or a project and unknowingly step into one of the drama roles. And, when they do, it can pull the rest of the team into a vortex of complaining and blaming others (Victim), making excuses for bad behavior (Rescuers) or criticizing and bullying (Persecutors).

He explained that when we can recognize the roles of the drama triangle, we can shift out of them by asking questions that can encourage a person to take another look at a situation through one of three lenses of more productive roles that include Coach, Challenger and Creator.

Here’s what he said about the healthy roles people can take to stay out of the drama:

Coach – supports others in tapping their own capabilities. This role feels supportive, optimistic, non-attached (observing and asking questions that guide vs being in the weeds) and offers a sense of contribution to help someone arrive at a solution.

Challenger – evokes or provokes the will to create in others. This role feels clear, confident, centered and committed to progress.

Do you see yourself as one of these three C’s? I know this conference session definitely gave me some food for thought about how much progress can be made when people feel empowered and encouraged by a coach, challenged to overcome an obstacle or weather a storm or encouraged to sit comfortably in a creator role to innovate with their team. Think about some drama in your office right now. If you’re somewhere in the triangle, try one of the healthier  C roles on for size. I know I’m trying to make my “C superpowers” stronger this month!