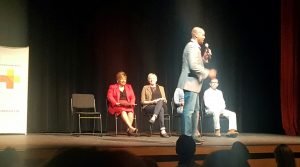 Speakers at Sum and Substance reveal how they found more fulfilling work.

“Go forth and do good”— that was the call-to-action issued to more than 100 attendees at Sum and Substance last week by five people who have found purpose and meaning in their jobs.

Put on in partnership with the local chapter of Conscious Capitalism, a business movement built on four key tenets—higher purpose, stakeholder integration, conscious leadership and conscious culture—the event featured their compelling stories, all ending with a challenge to help propel us forward by listening to our guts, tapping into our natural talents, working hard and finding opportunity even in the midst of what might appear to be failure.

Rocky Turner (Rock-T). Now a national radio and TV personality, Rock-T began his career as a professional baseball player with the New York Mets. But, he knew his passion was in radio. Instead of doing things the normal way, he decided to go his own route. After working for free at K-104 for a full year (doing everything from janitorial work to running errands), he was hired when the first available position became available. When he hears “no,” he hears it’s “on”—the reverse of the two letters. He believes that if you have an ounce of energy to pour into people, that’s all you need. “Don’t ever get stuck until it’s time to stick to something,” he says.

His challenge to us:  Go to dreamjobfreedom.com, enter your email address and allow him to be your accountability partner.

Debra Liva. A single mother of five at the time, Debra began her journey fighting an independent school district—and ultimately winning the battle. That win pushed her into her passion: advocating and protecting the rights of parents and their children with disabilities to receive a free and appropriate public education. She founded a non-profit—In Child’s Best Interest—that assists parents in discipline hearings, ARD/IEP meetings, mediations and due process and often works alongside an attorney.

Amy King. After a series of video production gigs and “adrenaline-based work” in New York and Los Angeles interspersed with bouts of depression and alcoholism, Amy knew she needed to live a more sustainable life. Years later, a chilling realization pushed Amy toward her “why.” She should have been on one of the downed flights on Sept. 11, 2001. But, she’d decided to take a flight two days earlier. In fact, her name was scrolling across news feeds as one of the deceased passengers. “I need to live my truth,” she thought. She’s now a community builder and budding work ecologist who launched GoodWork, a co-working concept in South Dallas designed as a dynamic, healthy space to cultivate productivity, wellness and bottom line results.

Her challenge to us: Look inside and think about one of your biggest life struggles and see what you learned from it. There’s a story there. Through vulnerability we have better understanding.

Stacy Bowers. In a matter of 90 days, Stacy’s life changed. After being herded into a meeting with other colleagues, she was surprised to find that she’d been laid off. She applied for hundreds of jobs and was offered several, but none of them resonated with her. To her surprise, she found fulfillment when she was encouraged to take a community-focused position with Citibank. Had she not stepped outside of her comfort zone, she wouldn’t be giving low- to moderate-income families the opportunity to buy homes and cars.

Her challenge to us: Think of something personal or professional that someone has been trying to get you to do that makes you uncomfortable. Over the next 90 days, look at that opportunity and do it.

Tom Landis. After having a successful marketing career, Tom opened his first restaurant in 1996. Thirteen more would follow over the course of 19 years. But, these weren’t typical restaurants with typical business models. He was giving marginalized people an opportunity to succeed. Tom recently opened Howdy Homemade, the first for-profit restaurant designed to employ people with special needs.

“If you want real success, you have to realize it’s not about you,” Tom says. He introduced and had his vice president join him on stage: Coleman Jones, a young man with special needs.

“I have a terrific job making money and being responsible. I now pay some of my own expenses. God is first. Family is second. I am last,” Coleman shared. “That part is hard sometimes.” We laughed in agreement.

Tom believes that Colin is the product of his purpose: “I taught him how to work. He taught me how to live.”

His challenge to us: Meet someone with special needs. Hire him or her.

Which challenge resonates most with you?